Why Geogrid and Geotextile are Essential 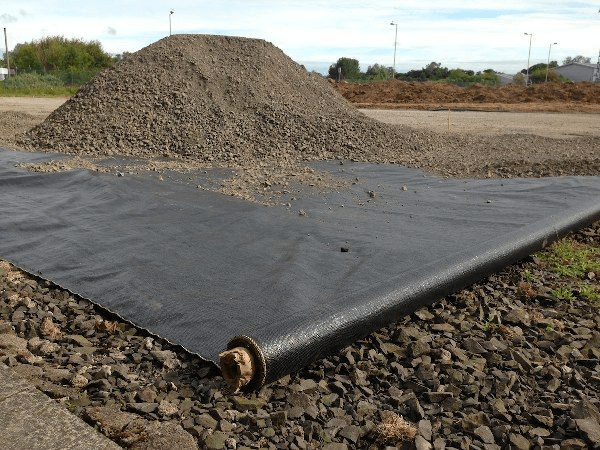 Have you ever thought about the physics behind a hardscape project? The answer from homeowners and contractors is usually the same: not at all. But, understanding the physics behind a patio or retaining wall allows us to install projects that last a very, very long time. Lets start with patios.

It is a known fact that patios last much longer and do not settle if there is a lot of compacted gravel under it. But what goes under the gravel? It is called “Geotextile Fabric.” It looks and feels exactly like a utility tarp that can be found at the home center. But, there are two big differences. It is permeable, and it is structural. Permeable means it allows water to pass through. So, all the rainwater that seeps through the joints in the patio and down through the gravel will continue down through the fabric and into the subsoil. And it is structural. After the existing soil is excavated and the fabric is laid down, layers of gravel are compacted on top. This fabric is able to support all that weight and carry it over failures in the subsoil. If a tree root rots and leaves a space, the fabric will span the space and continue to hold the weight of the patio.

As for retaining walls, the initial process is identical to a patio. The existing soil is excavated, geotextile fabric is laid down, and lawyers of gravel are compacted on top of it. Once the bottom layer of retaining wall block is set, we begin using our next product. It is called “Geogrid.” Geogrid is a high tensile strength mesh that resembles chicken wire. It comes in rolls, and is offered in a variety of sizes and utility ratings. Geogrid is used as an anchor system to keep the retaining wall from failing. As each layer of block is set, a section of geogrid is laid on top of the block and extended back into the mass of material being retained. Another block is placed on top, and the process continues until the wall is at its final height. There are 2 primary things to consider when using geogrid: the height of the wall, and the load it will be bearing. The taller the wall, the further back the geogrid has to go. As for load, this typically applies to driveways and vehicle loads. Even a small wall of two or three feet used to hold a driveway is under massive potential energy loads from the weight of a vehicle above it. Geogrid is essential in this situation. And a lot of it. Why a Design is Essential

Why would you need a blueprint for the outdoor space? A big advantage of hiring landscape designers is that they’re trained to think about
Read More So you’re thinking about a patio? You know how it will be used, you have decided on a size and layout. But what about
Read More

Why Geogrid and Geotextile are Essential

Have you ever thought about the physics behind a hardscape project? The answer from homeowners and contractors is usually the same: not at all.
Read More

There’s no project too big or too small. We’re here to help make it all happen. Fill out this form and get started on the path to designing your perfect outdoor space.